My earlier piece on serverless auth seems to have gotten some attention from the Internet.

In that post, I made a comparison to client-server architecture. I think that comparison is fair, but after discussing it with people I have a better way to explain it. If I abstract away the individual services from the diagram I used earlier, you can see it more plainly. 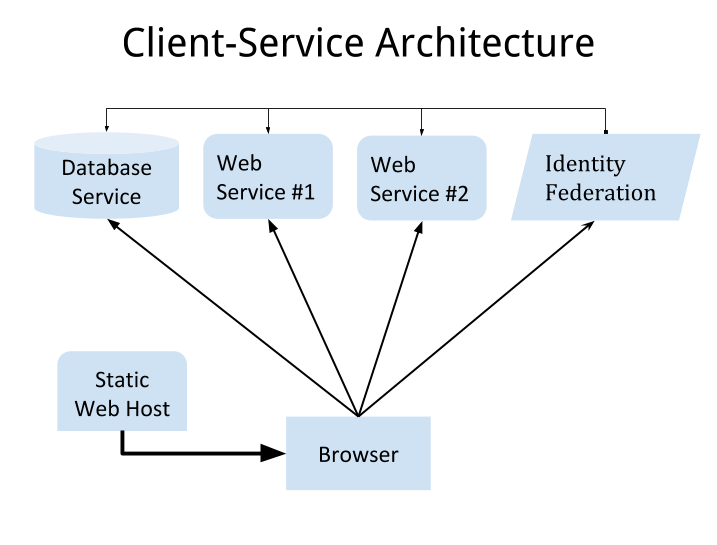 You could call this architecture client-service, as opposed to client-server. It's based on a thick client that directly accesses web services, all sharing the same authentication credentials (provided by yet another service), which are used to authorize access to the services in a fine-grained way. This approach is made possible by the serverless technologies created by Amazon and other vendors.

While this idea wasn't exactly controversial, I did get a few questions from people who were skeptical that this was truly revolutionary (or even effective). So, in the rest of this post, I'd like to address a couple of the questions that were asked.

Isn't putting all your business logic in JavaScript insecure?

The first thing to realize about this is that all clients are insecure. Just because you make a native app doesn't mean your application is immune to reverse engineering. If the security of your app depends on the fact that it's slightly more difficult for people to read your code on some platforms, you have a serious problem. So no matter what, if you're depending on client side logic to control what users can and can't do...well, I don't want to say you're doing it wrong, but I wouldn't want to use your app for anything important.

On the other hand, if you're worried about people reverse engineering your application's secret sauce, then by all means, don't put that part of your app's logic in the client. Unless you app is mostly made of sauce, this won't really be a problem. As I said in my earlier post, if some of your business logic needs to run on the server, microservices can be a simple, scalable way to do that in a serverless web app. Just keep in mind that you don't have to do this with everything.

Isn't this just OAuth and a thick client?

While both Auth0 and Cognito support OAuth identity providers, the capabilities of these services are beyond what you can do with just OAuth and a thick client. Many AWS services, including DynamoDB and S3, allow you to create fine-grained access control policies that use Cognito credentials to control what resources can be accessed by an authenticated user. For example, in DynamoDB, you can create a templated IAM policy that will limit access to individual records in a table based on the ID authenticated by Cognito. This means you can keep user data separate and secure while still keeping most of your business logic in the browser. The service itself can enforce the security constraints, and you don't have to use business logic to control who sees what.

Of course, using policy documents to control access isn't new. And federated authentication isn't new. And creating thick clients certainly isn't new. But bringing all these things together has created something new. As I show in my book, using this approach, you can create web applications at a fraction of the cost of a traditional load-balanced app server based design.